Margaret found a frightened little bird in the grass under a tree today. About a hundred feet from the chicken coop, it was chirping away, totally terrified. She gently picked him up and took him away from cats, dogs, and other predators. Steve rushed it to a friend, who is good with stray birds. Upon his return, both Steve and Margaret were shocked (okay one of them was not as shocked) to discover that the little bird was in fact a chick from our coop and not a wild wind-blown baby bird. In other words… A CHICK! A very independent and lucky chick. We have no idea how it wandered OUT of the coop and managed to chill there for who knows how long until Margaret came along. 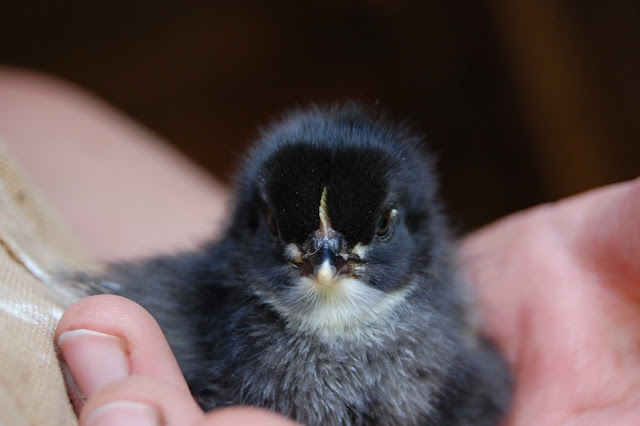 The broody hen is a Buff Orpington, but (now that I’ve checked with Morgan) we don’t think the new chick is one of hers. He’s probably the Black Australorp’s baby, crossed with our Rhode Island Red Rooster (Rodney). We’ve decided this one is male, mostly because Margaret wants to name him Oscar… but he could very well turn out to be Oscarella. Either way, so cute. So fierce!

He was put back into the coop with mama broody hen and comes out from beneath her wing to greet you if you go in to visit, but nuzzles his way back inside after a quick hello.