So when you decide to trim down a flock of laying hens, generally you cull the older chickens that are no longer laying (or laying sporadically). I’ve been told that good way to tell whether or not a hen is laying is to pick her up and feel between her hip bones. If her hips are wide – two or three fingers width – she’s probably laying. If they’re closer together, she’s not. Basically if you think an egg could squeeze through it probably has pretty recently. 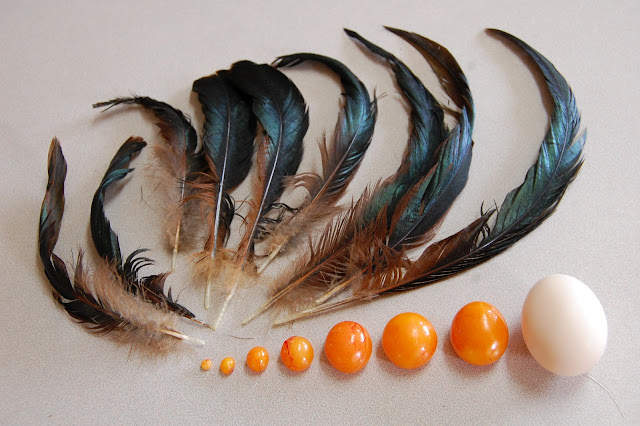 Don’t be fooled, though… eggs can get out of some real tight spaces. Robin and I culled the chickens today after checking all 16 hens twice over the last month. Four, we felt, definitely weren’t laying. Two young birds who we decided to give a chance, and two older birds who we separated last night along with our older rooster.

When we butchered them this morning, however, it became very clear that my methods need work: both older chickens were laying. Inside one of them, an elderly bird, we found the set of developing eggs in the picture above (including the fully formed egg). In the other, a couple developing yolks. And so: two fingers of hip space is no reason to go carting birds off to the kitchen. However, both of those birds had other reasons to go. One was diarrheic and has been for years, and the other has a seriously nasty temperament. The flock will be better off without them, though we’ll probably get fewer eggs.

The thirteen chickens that are left, we hope, will all be laying within a month and our egg production won’t dwindle too much. If it does, then those of you to whom I promised eggs may be waiting longer than I meant you to (oops!).